This pic of some leftover taleggio polenta that I warmed for Z is a good example of how I am trying to simplify the 'baby stuff' stock pile that manages to build with time.

I have a series of small pots and non-stick mini frypans have proven to be perfect to reheat tiny portions for a tiny tummy. I can warm and mush to the right texture at the same time.
Particularly, this small non-stick pan I purchased years ago to cook crumpets and single serves of eggs, has had a bit of a workout recently for Z.

Another way that I have been reheating food (I'm not a microwave fan and haven't had one for more than 10 years) is simply heating portions already stored in the ziplock bag like the pasta fagioli here. I toss the whole sealed and frozen bag in a pot of boiling water and then turn off the heat and wait a few minutes until its warm. This also saves on some washing up, a double win.

As you can no doubt tell, I'm not a fan of making things tricky unnecessarily and like that Z fits into our lives by eating simpler versions or components of our meals.
He has been tasting our meals from even just a few weeks old (not mouthfuls like now, just flavours on his tongue) and we are yet to find something that he doesn't eat greedily. On one occasion when I pureed some of our risotto it was too think and tacky and he started to refuse it after a few mouthfuls but once watered down with milk a little he was happy to eat the rest.
Last week I brought a sippy cup (more baby stuff!) thinking that he would learn to use it but he seems much more interested in sipping the occasional water out of an adult glass than his fancy gum protecting thing with handles. Before I know it he'll be asking for a his water in stemware!

I take my hat of to my devoted blogging friends, its a mix bag of emotions blogging again.
I love sharing and documenting this important stage in Little Z's life yet the guilt of going to bed at the end of another day with no blog post written is tough.
That being said, I really have such an easy baby that I shouldn't be thinking this is too hard writing a few words regularly as its mostly work that gets in the way, trying to steal a few nuggets of time to get that job finished or respond to the email instead of uploading the photo and getting whatever is swirling in my mind, onto this page.

We have been progressing so well with the solids, some definite favourites have been identified such as the blended pasta fagioli soup that I made a couple of weeks back. It looked hideous blended to take out the larger chunks but it still tasted (obviously) exactly the same and hence it was a huge hit.


One fun snack we had was some salmon roe, Z found the texture intriguing but I think he found masticating them too tricky and they just continued to pop out of his mouth again after a few seconds.
Simon ended up adding some to some mashed roast veggies and he ate them, but much to our surprise and (new parent) delight a few were visible still whole, unpopped (!!) when they came out the other end! Fun, but a big fail in regards to him getting the goodness actually inside him!


If your curious as to why I want Z to eat salmon roe you can find some great info here and here about Weston A. Price but essentially were talking mega doses of brain building omega 3s.

Posted by Jackie Middleton at 11:55 am 2 comments:

Surprisingly already, I'm in the position were I'm needing to share my lunch with Z.
My unadon (Japanese eel on rice) was greedily demanded after each morsel was sucked and swallowed.
I'd pull off a small piece of the flesh rub it between my fingers checking for tiny bones and then pop it on his tongue. He absolutely loved it and then even a small amount of the rice coated in the sauce.

I was conscientious about having lots of omega 3 foods whilst pregnant and then breastfeeding for his growing brain, its exciting now that I can share it straight from my favourite source, oily fish. 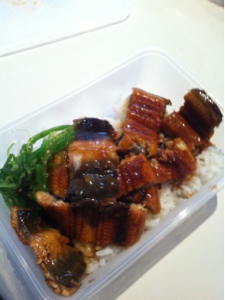 We spent the weekend on the Gold coast, (Simon ran the Gold Coast marathon and we proudly cheered from the side lines) and I haven't posted Z's most exciting meals to date yet but a sweet little by product of Z's solids are the gorgeous little scented burbs.
My absolute favourite so far is taleggio, from some awesome polenta last week, today's scented burb was pear.

It takes you by surprise as you get use to the delicious milky burb smells and then suddenly there are food ones, the product of all my fussing to get the right things and get them into his tummy.

No doubt within a couple of years I'll be telling him not to burb like that but until then I'll just keep enjoying the little baby burb reminders of meals once enjoyed...by all three of us.
Posted by Jackie Middleton at 10:21 pm No comments:

It's interesting how Z's mood affects whether he will 'play the solids game' with us each day. Last night he happily scoffed down more salmon pâté, (and then an hour later threw it up all over his play rug, whilst having tummy time), yet this morning he wasn't the least interested in his avocado and egg yolk breakie. The thing is I don't think it's the food itself, it's his mood.

I'm finding his little personality is already dictating the meal; happily feeding, biting whilst feeding (his newest and most endearing skill) or opening his mouth for me to welcome more of his favourite coconut yoghurt.

I'm understanding that it's important to have some Z friendly solids in the fridge so it's easy to take advantage of an inquisitive mood, and the chance to get a couple of delicious bits into his tummy.
Some polenta & taleggio awaits him tomorrow morning.
Posted by Jackie Middleton at 9:25 pm No comments:

Z had a little fishy snack tonight before his main course of a bottle (warmed whilst our baby brussel sprouts blanched). 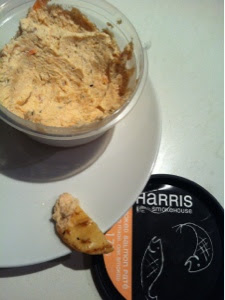 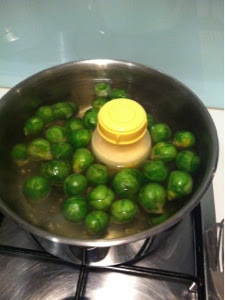 Posted by Jackie Middleton at 9:20 pm No comments:

The philosophy that I'm embracing for Z is the same way we eat. Food that's delicious and good for us.

The information about what should and shouldn't be first foods is so contradictory and confusing that I'm not surprised that so many people turn to the packets of factory made 'food' that they sell for babies.

Z is used to tasting my diverse diet via breast milk so it seems a step backwards to offer bland mush now.
The rule is if I wouldn't eat it, then he doesn't, and if I don't like the flavour then he probably will not as well. Luckily I eat everything.

Here's what's worked for us so far.

Labels: 16 weeks, nutrition, philosophy
Older Posts Home
Subscribe to: Posts (Atom)
Welcome
Eating with Jack began in 2006, purely as a food journal and creative outlet for a frustrated menu designer.
In the last six years a few things have changed; work, life and priorities in general and hence this blog was left to gather dust.
I have a new reason to blog and document a food journey, a very pure one.
My original Eating with Jack content can be found at www.originaleatingwithjack.blogspot.com